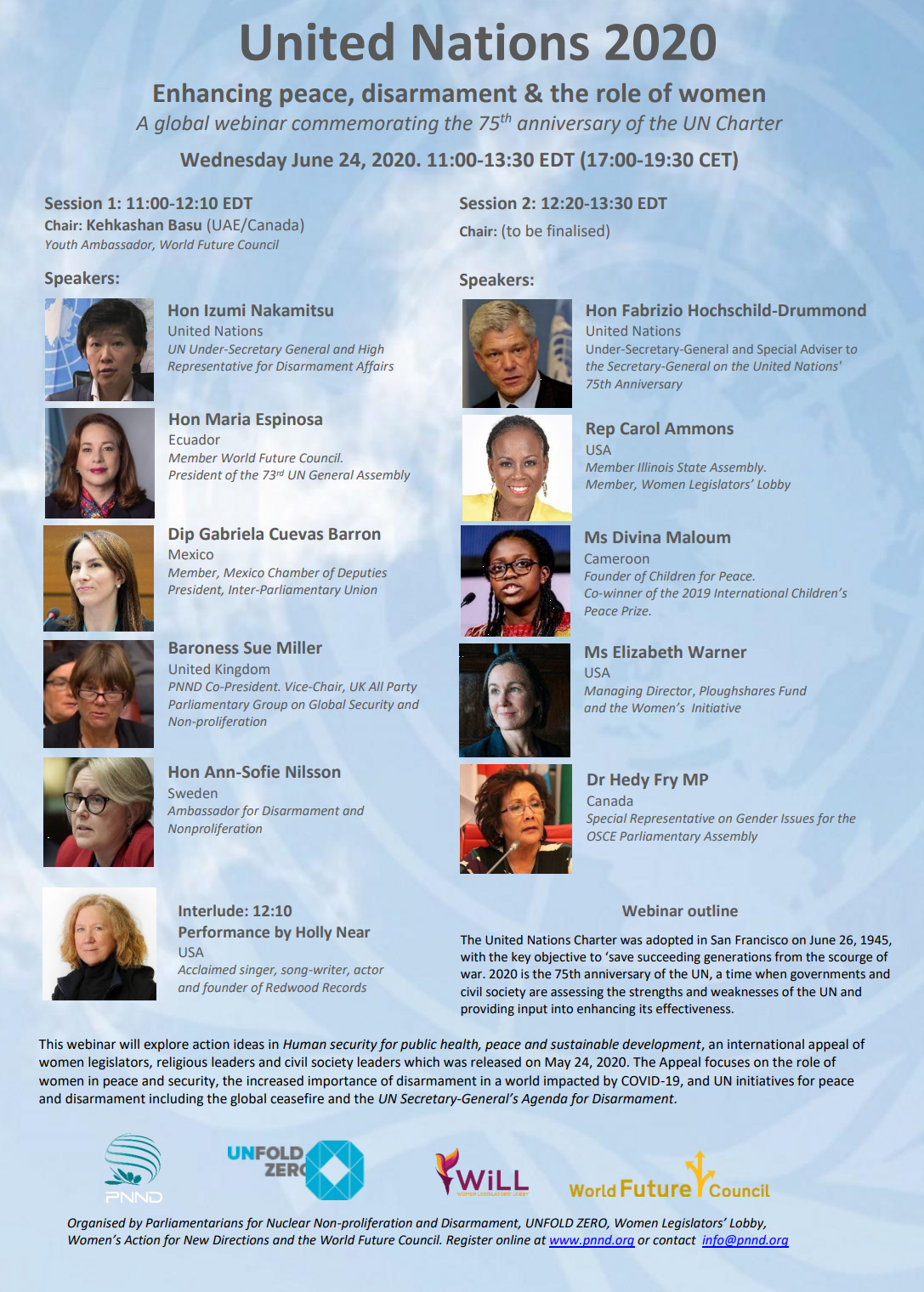 Join us for this webinar! Please click here to register for the event or email us at info@pnnd.org.
We cordially invite you to UN 2020: Enhancing peace, disarmament and the role of women, a webinar on June 24 commemorating the 75th anniversary of the adoption of the United Nations Charter in San Francisco, and 20 years of action on UN Security Council Resolution 1325 on Women, peace and security. The webinar will highlight the important roles and inspiring stories of women in peace and disarmament, and discuss concrete and effective ways to achieve the UN objective to save succeeding generations from the scourge of war. The event will include presentations from Hon Izumi Nakamitsu, Under-Secretary-General and High Representative for Disarmament Affairs; Hon Fabrizio Hochschild-Drummond Under-Secretary-General and Special Adviser to the Secretary-General on the United Nations’ 75th Anniversary; Hon Maria Espinosa, President of the 73rd UN General Assembly; Ms Gabriela Cuevas Barron MP, President of the Inter-Parliamentary Union; Rep Carol Ammons, Member Illinois State Assembly and Women Legislators’ Lobby, and a number of other women parliamentary and civil society leaders. Attached is the program. The webinar is a follow-up to the release on May 24 of Human security for public health, peace and sustainable development, an international appeal of 250 women legislators, religious leaders and civil society leaders from 50 countries which focuses on the increased importance of disarmament in a world impacted by COVID-19, and supports United Nations’ initiatives for peace and disarmament including the global ceasefire initiative and the UN Secretary-General’s Agenda for Disarmament. Please click here to register for the event or email us at info@pnnd.org. The webinar is organised by Parliamentarians for Nuclear Non-proliferation and Disarmament (PNND), UNFOLD ZERO, Women Legislators’ Lobby, Women’s Actions for New Directions and the World Future Council. Yours sincerely Alyn Ware PNND Global Coordinator UNA-NZ Special Officer on Peace and International Security Vanda Proskova PNND Coordinator, Czech Republic Principal organiser of the May 24 Women’s Appeal